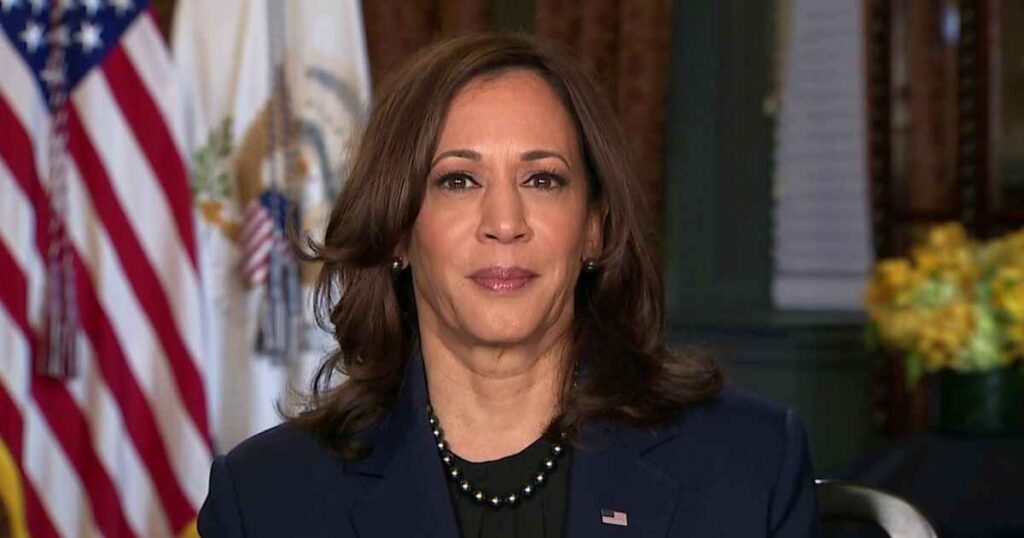 During her first year in office, Kamala Harris had trouble engaging the press and often laughed off tough questions or gave baffling answers. That changed on Tuesday, when the California Democrat joined the NBC “Today” show, following Vice President Joe Biden’s marathon press conference, during which she and Biden debated the legitimacy of the 2022 midterm elections and Russian aggression toward Ukraine. The questionable questions, and Harris’s evasive answers, made her a target for Savannah Guthrie and the audience.

Vice President Kamala Harris’ recent interview on NBC’s “Today” show has sparked a firestorm of controversy. During the interview, the California Democrat promised to “levy severe costs” against Russia if it invaded Ukraine. Her comments about accountability were met with mockery by conservatives. However, the interview was more about Harris’ words than anything else.

During an interview with Savannah Guthrie today, Vice President Kamala Harris addressed her views on the war in Ukraine. The two sides appeared to split over certain policy points, but Harris avoided addressing the dividing line between progressives and moderates. In fact, Harris was clearly annoyed by Holt’s question about her personal absence from the border. But that didn’t stop Guthrie from grilling Harris on the topic.

During her today interview, Harris faced a barrage of questions, including those regarding failed voting rights legislation and the 2022 midterms. She evaded answering questions about the two bills that failed to pass the Senate. She also refused to answer Guthrie’s questions about the two failed voting rights bills. At one point, she was asked if she believes in the integrity of midterm elections, but Guthrie interrupted her to ask about it.

Senators Joe Biden and Kamala Harris have traveled to Atlanta to speak with activists on the John Lewis Voting Rights Act. During the interview, Harris expressed her support for the Freedom to Vote Act, which would restore full protections to the Voting Rights Act of 1965. The Freedom to Vote Act, which combines the provisions of two separate Senate bills, would prevent voter suppression. Despite these differences, Harris has received widespread support from Democratic Senators, although Senate Republicans are expected to oppose the bill.

Although the issue of voting rights may not be high on most Americans’ priority list, Vice President Kamala Harris argued that a lack of protection for voters could hurt the United States’ reputation in the world. She also pointed out that a lack of voting rights protections has weakened the American political system, and that the GOP is waging an ‘unrelenting assault’ against minority voters.

The ‘Today Show’ has a history of being a friendly space for Democratic candidates, so it is no surprise that Senator Kamala Harris was asked about the failed voting rights legislation. While the ‘Today Show’ is well-known for favoring the Biden administration, it is hard to know how serious the questions were when Harris was grilled on the subject of voting rights legislation.

The Vice President of the United States was grilled today during an interview with Savannah Guthrie on MSNBC. Guthrie pressed Harris to elaborate on her answer to a question about her support for the failed voting rights legislation passed by the House last month. Harris, meanwhile, blinked and resorted to talking about her own past accomplishments as the chief justice of California. She repeatedly dodged questions about Biden’s failed voting rights bill, and cited the Democratic Party’s division over voting rights.

After the first question, Harris tried to avoid answering the second question, which focused on the so-called progressive-moderate split in the Democratic Party. While she avoided discussing her personal views on these issues, she did address the broader issues of racial injustice and the war in Ukraine. But she also cited the current shortage of COVID tests, an indicator of the amount of the disease that is common among immigrants.

Another major sticking point was Harris’s refusal to travel to the border to discuss the migrant influx. As Vice President, she has been tasked with addressing the “root causes” of migration, but hasn’t visited the border herself. In response, Holt pressed Harris to explain why she hadn’t visited the border yet, asking whether she planned to do so in her new role. Harris seemed to get frustrated, and the moment was capped by her response to Holt’s remark: “I haven’t seen the border.”

Vice President Joe Biden’s build back better plan was grilled in a highly-contentious interview today. In his proposal, the government would implement a new surtax on billionaires and multi-millionaires. Under this plan, these wealthy individuals would be taxed at a minimum of 15 percent of their net worth, a rate that would be doubled for those making more than $1 billion per year. Moreover, the program would eliminate loopholes that allow these people to avoid paying Medicare tax.

One of the most prominent opponents of Biden’s build back better plan is Sen. Joe Manchin, who supports the president’s budget but has not supported the legislation. Manchin has not endorsed the Build Back Better Act, despite the fact that it has been widely praised by Republicans. The move has been hailed by Republicans, but it is unclear how the Build Back Better Act will fare in the Senate once it returns.

As for the Clean Energy Jobs Act, Manchin has rejected a provision that would penalize fossil fuel companies for their use of coal, oil, and natural gas. He also has opposed a provision that would provide tax credits for electric vehicle purchasers. And while the Clean Energy Jobs Act has stalled in the Senate, House Democrats are urging President Joe Biden to move forward with the bill and implement its provisions. Indeed, the climate crisis is urgent and requires immediate action.

As President Obama is grilled about voter turnout in his contentious Today interview, one thing is clear: we’ve got a problem. Voter turnout is way down. It’s a problem that has been plagued for years, but now it’s getting worse. According to a new survey, 83% of voters are saying they care who wins. But how do we change that? First, we must address the reasons for low turnout in our country.

The most cited reason for this disparity is that young people tend to vote less than older people. For example, their turnout rate is about 10 points lower than that of citizens 30 and older. Racial and ethnic groups also have varying turnout rates. And women are more likely to vote than men. But that doesn’t mean women are not voting at the same rates as men. After all, they’re just not as motivated.

Another reason for low voter turnout is the lack of civic responsibility among younger people. For example, when people have lower incomes, they’re less likely to vote. That’s a problem because it means that the leaders they elect are less responsive to the needs of the majority. However, these same citizens’ dissatisfaction with the results of the elections may be a symptom of a larger problem.

Despite the controversy, Kamala Harris has remained a quiet force in the administration. While her presence has centered attention on various issues, her staff have repeatedly fallen short of expectations. Some advisers lament her cautious tendencies. In her first year in office, Harris’s team has failed to contact supporters or follow up on questions. As a result, many feel isolated and resentful of her.

It’s no secret that Harris has a rocky relationship with the White House. Many of her long-time supporters feel abandoned by Harris, while others don’t see a coherent public message from Harris. In addition, being the first woman of color in the US has been difficult. There’s no room for even the slightest mistake. The media, though, never lets a black woman win.

As a former journalist, I’ve heard stories about VP Harris mispronouncing words in a video clip from her recent trip to Paris. She also admitted to using an accent when speaking with scientists from the Pasteur Institute. The former senator’s speech was aimed at improving relations between the United States and France. The clip went viral and was widely criticized on Twitter. However, Harris responded in a thoughtful and mature way, denying the accusations.

The video mockery was further compounded by the production company behind the video. It was made by Sinking Ship Entertainment, a Canadian company. The video was also shot in the midst of the chaos surrounding the U.S. withdrawal from Afghanistan. This news led to a large amount of social media users teasing Harris. This fueled further discussion.