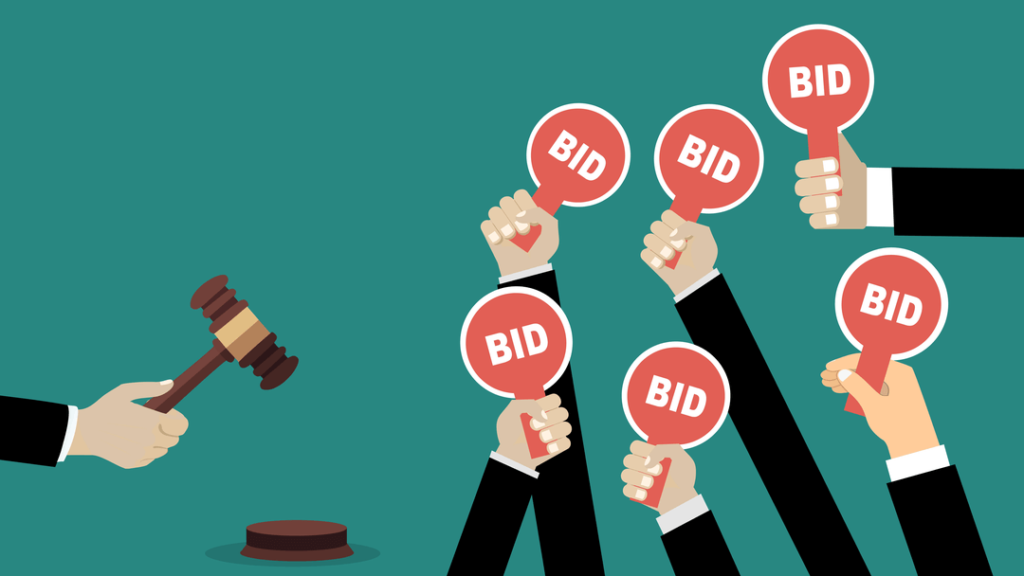 An auction is usually a process of buying and selling goods or services by offering them up for bids, taking bids, and then selling the item to the highest bidder or buying the item from the lowest bidder. Some exceptions to this definition exist and are described in the section about different types. The branch of economic theory dealing with auction types and participants’ behavior in auctions is called auction theory.

The open ascending price auction is arguably the most common form of auction in use throughout history. An auctioneer may announce prices, bidders may call out their bids themselves or have a proxy call out a bid on their behalf, or bids may be submitted electronically with the highest current bid publicly displayed. For most of history, auctions have been a relatively uncommon way to negotiate the exchange of goods and commodities. In practice, both haggling and sale by set-price have been significantly more common. Indeed, before the 17th century only a few sporadic auctions were held.

Auctions have a long history, having been recorded as early as 500 BC. According to Herodotus, in Babylon auctions of women for marriage were held annually. The auctions began with the woman the auctioneer considered to be the most beautiful and progressed to the least. It was considered illegal to allow a daughter to be sold outside of the auction method.

Auctions took place in Ancient Greece as well as other Hellenistic societies, and also in Rome. During the Roman Empire, after a military victory, Roman soldiers would often drive a spear into the ground around which the spoils of war were left, to be auctioned off. Slaves, often captured as the “spoils of war”, were auctioned in the Forum under the sign of the spear, with the proceeds of sale going towards the war effort. For example, Marcus Aurelius sold household furniture to pay off debts, the sales lasting for months. One of the most significant historical auctions occurred in the year 193 AD when the entire Roman Empire was put on the auction block by the Praetorian Guard. On 28 March 193, the Praetorian Guard first killed emperor Pertinax, then offered the empire to the highest bidder. Didius Julianus outbid everyone else for the price of 6,250 drachmas per guard, an act that initiated a brief civil war. Didius was then beheaded two months later when Septimius Severus conquered Rome. In a candle auction, the end of the auction was signaled by the expiration of a candle flame, which was intended to ensure that no one could know exactly when the auction would end and make a last-second bid. Sometimes, other unpredictable events, such as a footrace, were used in place of the expiration of a candle. This type of auction was first mentioned in 1641 in the records of the House of Lords. The practice rapidly became popular, and in 1660 Samuel Pepys’ diary recorded two occasions when the Admiralty sold surplus ships “by an inch of candle”. Pepys also relates a hint from a highly successful bidder, who had observed that, just before expiring, a candle-wick always flares up slightly: on seeing this, he would shout his final – and winning – bid.

The London Gazette began reporting on the auctioning of artwork in the coffeehouses and taverns of London in the late 17th century.

The first known auction house in the world was Stockholm Auction House, Sweden, founded by Baron Claes Rålamb in 1674. Sotheby’s, currently the world’s second-largest auction house, and published its first auction catalog in that year, although newspaper advertisements of Christie’s sales dating from 1759 have been found.

By the end of the 18th century, auctions of art works were commonly held in taverns and coffeehouses. These auctions were held daily, and auction catalogs were printed to announce available items. In some cases these catalogs were elaborate works of art themselves, containing considerable detail about the items being auctioned. At this time, Christie’s established a reputation as a leading auction house, taking advantage of London’s status as the major centre of the international art trade after the French Revolution. The Great Slave Auction took place in 1859 and is recorded as the largest single sale of enslaved people in U.S. history — 436 men, women and children. During the American Civil War, goods seized by armies were sold at auction by the Colonel of the division. Thus some of today’s auctioneers in the U.S. carry the unofficial title of “colonel”.